With the covid there was a significant reduction in raw materials, due to both the reduction in availability and the increase in cost. Now with the war in Ukraine, things are further complicated: Russia is one of the richest passes in raw materials, especially metal materials. A small local example is the interruption of production in Abruzzo.

Three more days of production stop at Sevel in Atessa (Chieti) due to the lack of material, specifically the ZF power plants to set up the Ducato van.

This was announced by the RSA of Uilm.

The production resumes, except for various other communications, on the first shift on Monday 4 April. The CKD department of the Bodywork works only partially. For this stop will be required the economic treatment of layoffs. The Sevel management also communicated to the unions that on Saturday 9 April, turn B, and Sunday 10, turn C, they will carry out the recovery of the previous stops.

Villalfonsina is an Italian town of 911 inhabitants in the province of Chieti in Abruzzo, part of the union of the communes of the Miracles.

The origins of Villalfonsina are uncertain and a source of discussion. However, some texts state that the town was founded in the 16th century by the feudal lord Alfonso Caracciolo prince of San Buono and baron of Casalbordino. Other sources assert instead that the country was founded by the Schiavoni who landed on the Osento river with makeshift vehicles, fled from the Balkan peninsula pushed by the Turkish advance in search of more hospitable lands. At that time the area was under the fief of the d’Avalos of Vasto who owned a palace surrounded by farmhouses of colonists and servants, for which the population was subjected to the service of his belongings. A trace of this settlement remains in the parish, which has a bulb-shaped bell tower, typical architecture of the eastern shore of the Adriatic.

Casalbordino is an Italian municipality of 5972 inhabitants in the province of Chieti in Abruzzo, and is the seat of the union of the municipalities of the Miracles.

The name goes back to a leader of that period, Roberto Bordinus, who captained the garrison in defense of the monastery.

Casal, that is, a farmhouse, a small territory of dwellings that guarded the monastery, developed from an ancient tower, later became the fortified center, a fief of the D’Avalos.

The mother church of San Salvatore, the main church in the city center, whose first plant dates back to the 14th century. It has neoclassical features, although the interior retains the late Baroque appearance.

The sanctuary of the Madonna dei Miracoli, an important Theatine sanctuary, located north-east of Casalbordino in the suburbs, a destination for pilgrimages, since the period of the Marian apparition to the farmer Alessandro Muzii in the year 1576, when there was a terrible storm that destroyed the collected, except that of the villager, who prayed to Our Lady. The sanctuary was built over the first chapel in 1824, however being damaged by the Second World War, when the Benedictine monastery had already been built, it was redone again in the 1950s, finished in 1962, having a neo-Renaissance style. The historical sanctuary was immortalized by Gabriele D’Annunzio in the novel The Triumph of Death, which summarizes the events of the Marian apparition of 1576, and then describes the pilgrimage of wayfarers and wretches, in asking for thanks to the Madonna, under the gaze of the protagonists of the story Giorgio Aurispa and Ippolita Sanzio.

The Lido (beach) di Casalbordino, equipped and popular seaside resort with a large sandy beach, is 7.5 km from the municipal capital and extends along the suggestive Costa dei Trabocchi, a very short distance from the spectacular rocky coast of the Marine Natural Reserve of Punta d’Erce ( or Punta Aderci), called in the area “the little Normandy”.

Rocca San Giovanni is an Italian town of 2 301 inhabitants in the province of Chieti in Abruzzo, north-east of Lanciano. It is part of the Club of the most beautiful villages in Italy.

The maritime area of ​​Rocca San Giovanni, is rich in hamlets and seaside resorts, which make up the so-called Costa dei Trabocchi. The coast is characterized above all by the presence of ancient and modern overflows, wooden fishing machines.

The most interesting beaches of Rocca San Giovanni are: La Foce, Il Cavalluccio, Vallevò and Punta Punciosa, in addition to the countless “coves” with a fishy, ​​turquoise and transparent sea. They are considered among the most beautiful on the Costa dei Trabocchi.

In the hinterland, a few kilometers from the sea there is the real town. Located on a small hill in the midst of green bushes. The village is small but the whole historic center is kept in perfect condition, and almost all the houses are renovated and with painted plaster.

Church of San Matteo
It is located in Heroes’ Square. According to some reliable bibliographic sources, the original church was built inside the castrum of San Giovanni in Venere. The medieval building copies the abbey of San Giovanni in Venere in smaller sizes. The bell tower was added between the 14th and 15th centuries. In the eighteenth century the truss was replaced by ribbed vaults in the central nave and barrel vaults.

Town Hall
It was built between the late 60s and the 70s of the nineteenth century and restored in 1926. The building overlooking Piazza degli Eroi is square in the neo-medieval Lombard style. On the ground floor there is an arcade which is made up of three round arches. On the first floor three openings with round arch lead to the balcony with a perforated balustrade. On the sides there are two identical windows. The central part of the facade is slightly advanced compared to the rest of the building. The facade is completely made of square blocks of sandstone. Inside, an imposing staircase leads to the council chamber. Since 2004, a collection of contemporary art has been held inside that collects sculptures, paintings and engravings placed on the main internal staircase and in the council chamber.

Remains of walls and Torrione dei Filippini
The main ruins of the walls of the fortress are located in via abate Oderisio where there is the Torrione dei Filippini, characterized by a masonry, irregular ashlars and river pebbles, and an irregular circular system used as a dwelling. The walls date back to the Normans from which they were built in 1061. The walls, accessible from via IV Novembre or from alley Portico, are made of stone pebbles from the surroundings. 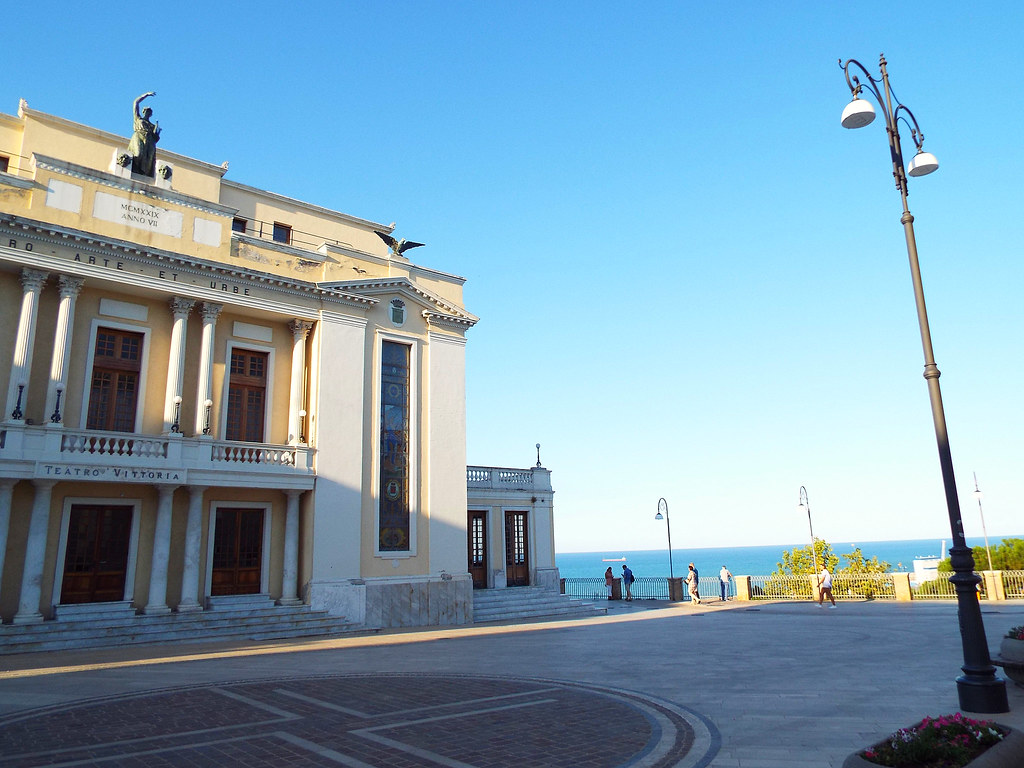